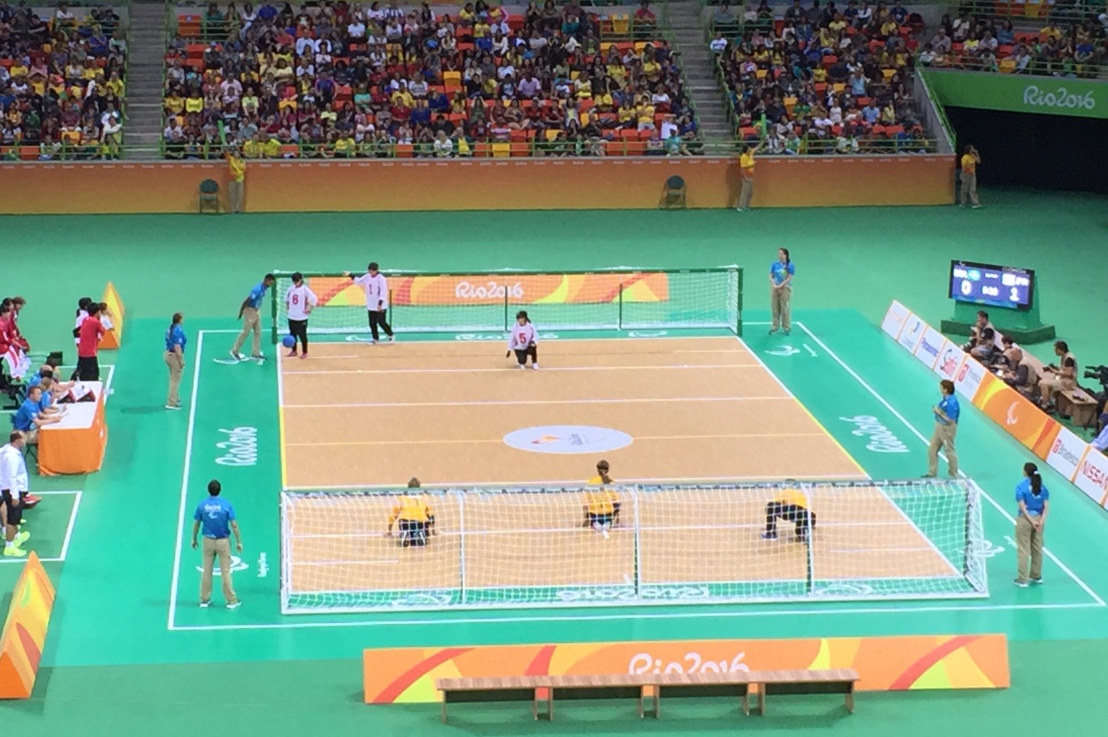 We’ve continued to fill our days with new adventures, exploring local parks, getting into pick-up soccer games with local kids, and trying customary treats- acai, empada, and anything marcuja (which everyone but Sean highly recommends).

At Colin’s suggestion a few days ago, our ‘cooking class’ consisted of the entire family working together to make vegetable soup and garlic bread.  It was pretty entertaining, especially considering that our kitchen here is way smaller than our kitchen at home and for those who have seen our kitchen, you know that means pretty darn small. Nonetheless, it was delicious.  So much so that we promptly made garlic bread again the next night to go with the (less popular) frittata entree that I (unfairly?) chose to make without class input.

Yesterday the entire family road bikes 4.5 miles around Lagoa Rodrigo De Freitas in town (Colin got a ride in a jump seat with Jim), which was our longest family bike ride yet anywhere and gave us excited visions of future 2-wheeled journeys. 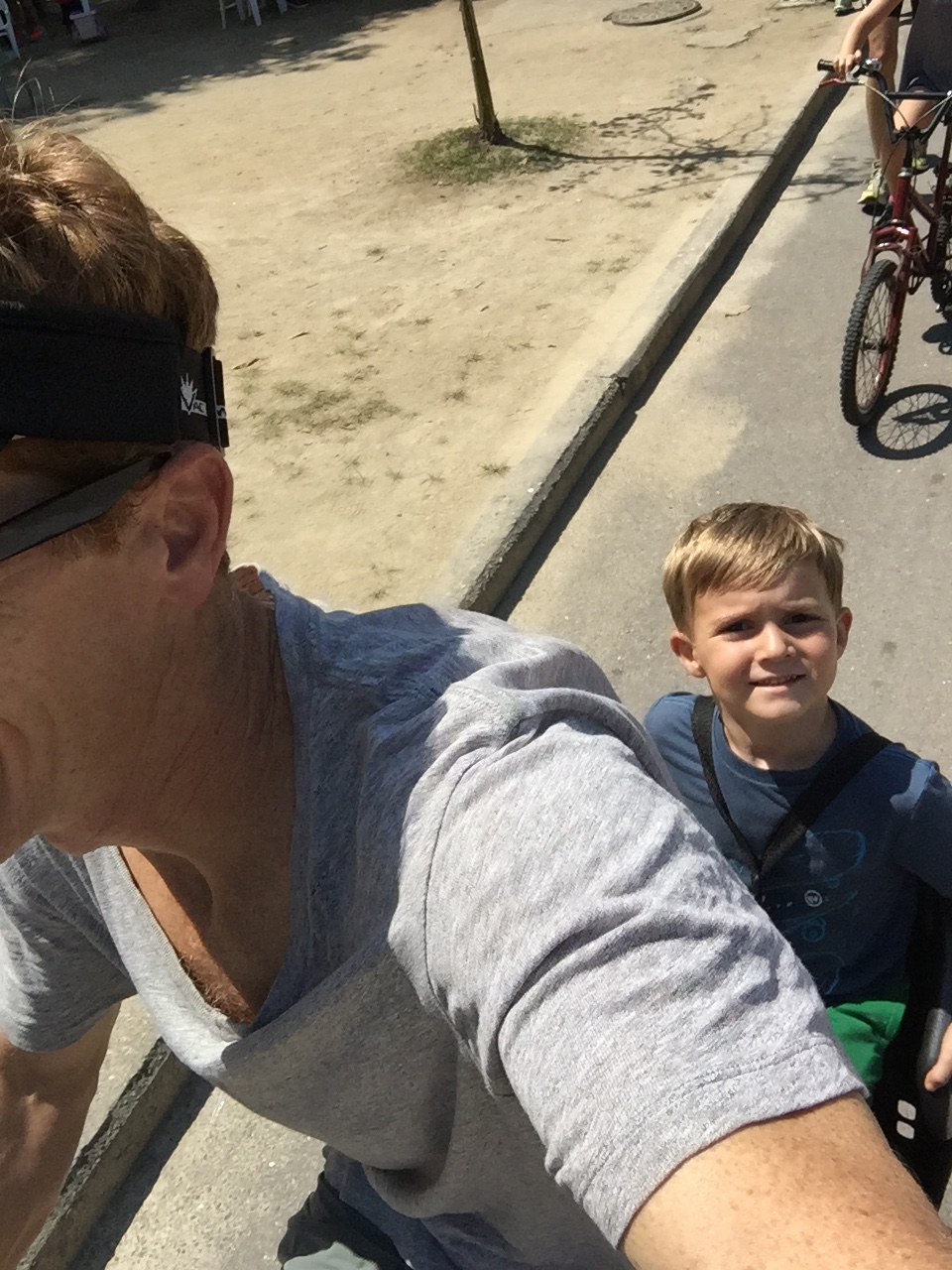 Late last week, we ventured far afield of Ipanema to see a great match between two of Rio’s rival soccer clubs, Botofogo and Flumanense, and made friends with some of the local fans in the process.

Wearing the home team colors (or close) went a long way toward being welcomed in the goal-line bleachers, with more than one stadium usher making sure we sat in a section appropriate for gringo tourists (i.e. not with the loucos, see above)

Rio has a relatively new subway system (built in the 1970’s), taxis a-plenty, and even Uber, so we’ve been able to cover a lot of ground in our explorations.  Getting around town invariably means getting outside of the more ‘touristy’ areas and seeing more of the typical neighborhoods, people, lifestyles, and situations.

Starting with our ride from the airport when Sean asked “why are so many buildings here broken?” we have had the opportunity for lots of conversations about how there are many places in the world that do not look like where we live, and how lucky we are to have the safety, cleanliness, and resources that we have in the U.S. and specifically, in the Bay Area. It’s been an interesting balance as a parent to help them stay safe in a place with unfamiliar hazards, while trying to not create fear or dislike for things that are different than what we’re used to.

While thousands of people are relaxing on the beach each weekend, vendors, primarily men, women and children from the favelas (slums), walk up and down the beach selling snacks, beach games, and souvenirs for tiny profits. We’ve always tried to have open conversations with our kids about differences between families in terms of homes, backgrounds, beliefs, and money, but as they say, ‘an picture is worth a thousand words.’ Seeing these people working while we played definitely incited many questions, and hopefully this is a picture that will stick with them for more than one afternoon on the beach and influence them in positive ways. 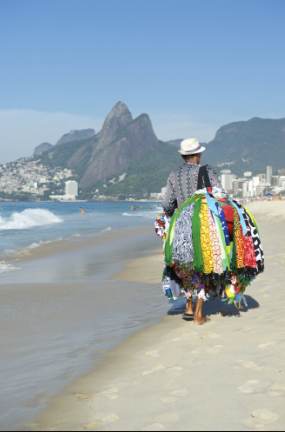 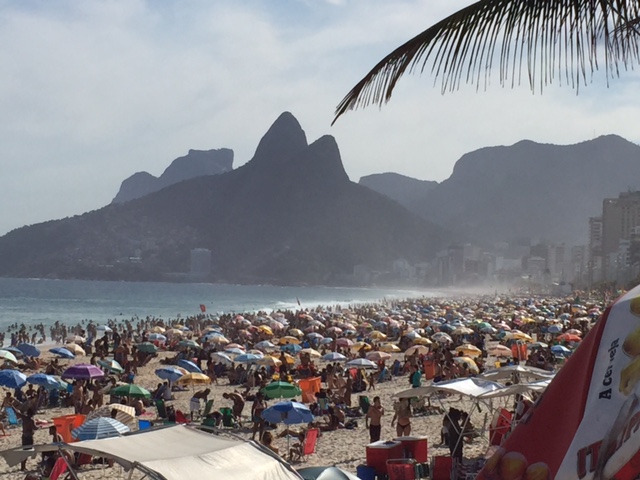 Traveling is a privilege; and it can be amazing, romantic, exciting, and life changing. Travel can also be hard, because change always is. While some edges are rougher here to be sure, we are surrounded by so much natural beauty, and we’ve already encountered so many friendly and welcoming people, it’s a great opportunity (though tough at times!) to open ourselves up to the change and try to be in the moment. I keep telling myself and the kids that instead of focusing on what we miss about home, we should focus on all the new things we can appreciate about here.  I’ll be the first to say that (especially traveling with all of us) this is sometimes easier said than done (but maybe we’ll get better at it with time?) Anyway, we’re all working on this in our own ways (whether we know it or not!)

The highlight of the past few days has by far been the opportunity to attend Paralympic events and we plan to see more on Tuesday.

The first event we saw is unique to the Paralympics and is called Goalball.  Goalball players have visual impairments or are totally blind and rely on touch and hearing only to track a soccer-sized ball with a small bell inside of it as they try to score on opponents or defend their own goal.  Because they track the ball with sound, the official calls for quiet before the ball can be in play.  It’s hard to describe, but amazing and beautiful to see the coordination between teammates and how fluidly and naturally they move in response to sounds from the ball and from the other team.

You can see live action here. We also had the good fortune of running into a few athletes from TeamUSA and they were kind enough to pose for a photo op: 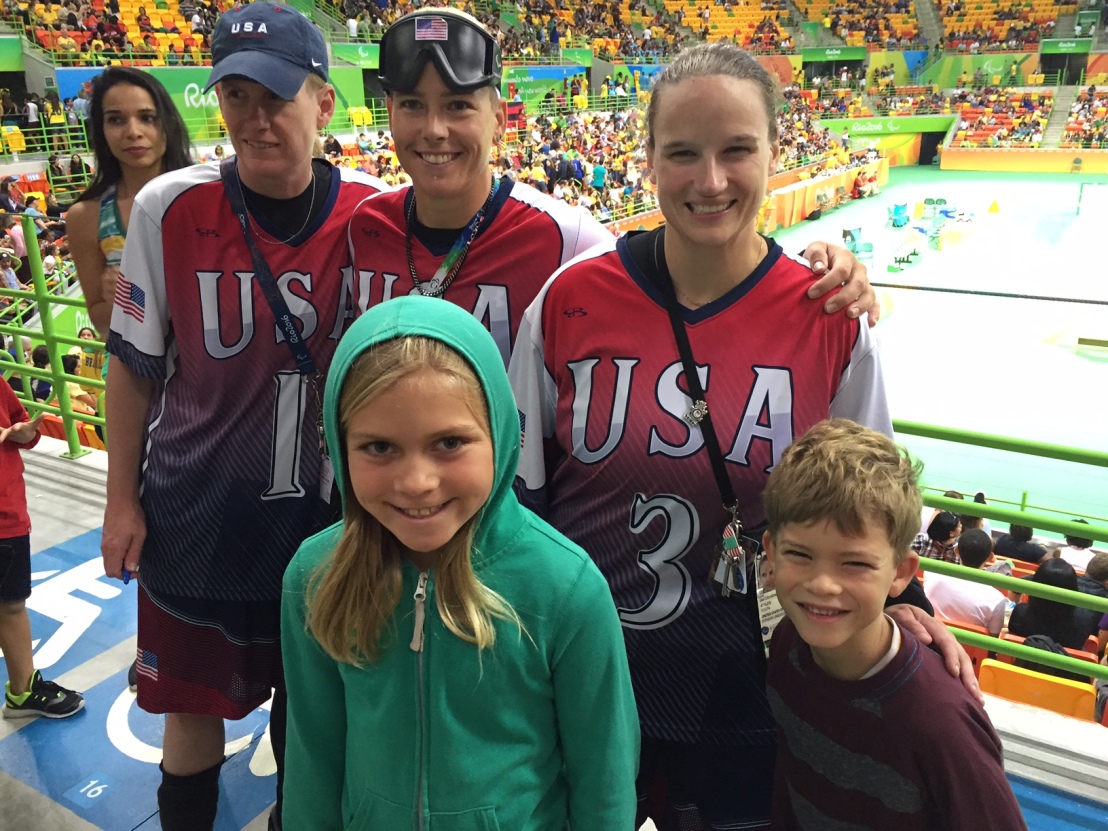 We also got to see a portion of the men’s Paralympic triathlon which was held off of Copacabana Beach.  As with many other events at the Paralympic games, there are different divisions for athletes with different types of impairments.  I’ve always been somewhat in awe of all the athletes in my life that regularly compete in Ironman competitions, run marathons, and run ultras (100Ks!), but I’ve honestly never been so in awe of athletes as I am of these competitors.

Paralympic triathletes start with a 750M open water swim (a challenge for most people in it’s own right- imagine jumping into an unfamiliar ocean to do this swim with a major visual impairment or without the use of all of your limbs).  Next, they complete a 20KM bike ride, on bikes modified to allow the athletes to power them, usually with only their arms.  Finally, the athletes run with a guide (in the case of visual impairment) or with one or more prosthetic devices to run the 5K. 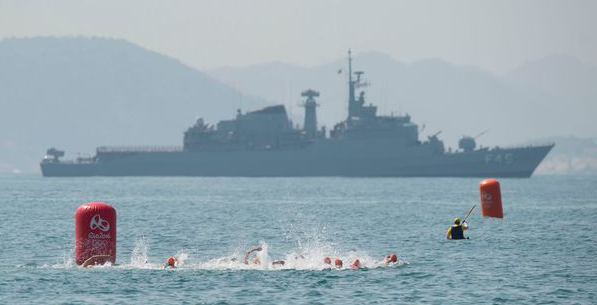 Thinking about the challenges that each of these athletes most likely faces in their daily lives, that they have faced since they were born, and what they’re accomplishing in their training and competition is so humbling and inspiring.  Most of us will probably never face anything so difficult in our own lives. Of course we all face challenges; it’s not that the relative magnitude of what they’re doing diminishes what each of us faces and overcomes. For me, it’s that these athletes are an amazing example of what humans can accomplish when we’re determined and committed. It’s undoubtedly cliche, but the strength of the human spirit on display is a privilege to behold and we are grateful that we’ve had the opportunity.

Next up this week we are going to have the opportunity to see 5 v. 5 soccer with visually impaired athletes, and sitting volleyball, before we take a 5-day trip to Iguazu Falls.

We’re having fun in our daily adventures, looking forward to what’s ahead, and trying to enjoy each moment (and sometimes just driving each other slightly batty, because that’s what families do, right?)

NorCal State Cup champs! Starting all the way back in October, these guys worked hard and took it all the way today! Sean was stoked, he just saves his smiles for off-camera. Gotta maintain that game face! 😉 #spursfc #spurs09
Sometimes, these three all smile at the same time. #dontblink
Kites and cousins, welcoming 2020! #bringit #stinsonbeach #grateful
A little Christmas romance despite a tough futsal defeat by what some would call the underdog team (oh sweet victory!) #xmasspirit
It’s a twin-twin semi-final in the annual tourney. #mindgames #esp #prideontheline
Sugar cookie time. Nine out of ten grandchildren agree, the more sugar the better. (10th grandchild probably agrees but was unavailable to comment at press time). #greenhouse #grandma #xmas
%d bloggers like this: